Wally Island is the latest breakthrough project developed by the WallyDesign© department to have a mega yacht with all the comforts and amenities to live onboard full time, that is completely independent and self-sufficient, and features improved nautical characteristics compared to those of similar size yachts. The price of WallyIsland is very competitive also because she is characterized by a “commercial” look: with no fairing and paint, the mega yacht resembles a tanker, and the rough finishing contributes to the unique appeal of this mega yacht. An additional design concept is that the building costs are generated by the volumes: WallyIsland is developed on the length rather than on the height, thus reducing the price and at the same time improving the stability, resulting sleeker and featuring a huge forward deck area of 1,000 m2 (10,764 sq2) that can be devoted to different uses (tennis court, mini soccer court, garden with swimming pool, heli pads…). The swimming pool at the forward end is extra large and all the deck is the perfect area for events. The huge fuel tanks (750,000 l – 198,129US gal) are located in the lower part of the yacht and provide for 15,000 nm range at cruising speed (equivalent to five years of navigation!). The superstructure of WallyIsland is aft and is designed in the style of an airport control tower. It features three decks: upper deck, owner deck and bridge deck. Three more decks are in the hull: main deck, cabin deck, service & saloon deck. The lower deck is for the engine room, the systems, and the fuel tanks.The aft cockpit deck is dedicated to the outdoor storage of the tenders (two 47 Wally Powers –13.6 m / 45’) and all the water toys. The area has enough space for two sailing boats and two or more tender cars. Two cranes can easily move all these items. The interiors feature the main saloon, the living/dining room; the guest accommodation (owners’ suite + 6 double king size suites that can be transformed into 12 suites for 24 guests); the library, cinema, SPA, wellness and fitness area; the service and crew area; the steering/navigation area. Another revolutionary feature of WallyIsland is that the guest and crew cabins are fitted inside the topsides. This new concept provide for two independent service corridors, and for  an easier construction of the cabins.Thanks to the vast and versatile saloon areas, WallyIsland can be used for exhibitions, conventions, fashion shows.Even if the high performance is not the main target of WallyIsland, the general technical characteristics are at top level. Comfort, extended range, and high and constant cruising speed are impressive. The foreseen Azipod electrical propulsion system, the Zero Speed stabilizer and the dimensions of the boat give an extra comfort new aim for mega yachts.

Rainsford Mann Design has recently begun work on an exciting new 140-metre megayacht. The project was initiated in response to a number of enquiries that the firm has received for very large motoryachts with the capability to be independent of shore facilities for substantial periods of time. The timescales thus involved required a quite different approach from conventional superyacht design, with additional consideration needed to be given to issues such as security, communications, waste management and crew quarters, as well as office and entertainment facilities.The 140-metre applies the very latest technology across all aspects of her design and operation. One example is the rotating ‘Azipods’ used to drive the vessel. These give ultra-efficient, ultra-quiet operation and their ability to rotate 360° makes the vessel extraordinarily manoeuvrable. The yacht is also fitted with fibre-optic cabling for all the command and control systems, thereby saving space and giving dramatic improvements in data transmission speeds over traditional copper wiring. Safety and security are a major consideration. Not only is the 140-metre designed with automated long-range infrared and visible light TV cameras, it will also come with a Cerberus Diver Detection System capable of identifying and tracking multiple divers within 1600m of the vessel. Additional security measures include Long-Range Acoustic Devices to project clear audio messages up to 1km and key cards for all personnel, both to allow access to defined areas onboard and for man overboard detection. Also incorporated into the base specification is the installation of laminated polycarbonate level VI armour glazing in areas where passengers are at greatest potential risk to give protection from long-range, high calibre weaponry. Critical areas of the hull, including the bow and the engine room, will also be plated with lightweight ceramic armour. Secondary transport systems will include high-speed tenders, a dive boat, jet skis and the option of a 10-man, luxury submersible with integral airlock that is launched through an open pool in the base of the yacht’s hull and is capable of reaching depths of more than 400m. A 1:150 scale model of this remarkable yacht was shown for the first time at the Dubai Boat Show 2007, and work is continuing during the year on schemes to give her an interior as innovative and exciting as her exterior and systems. 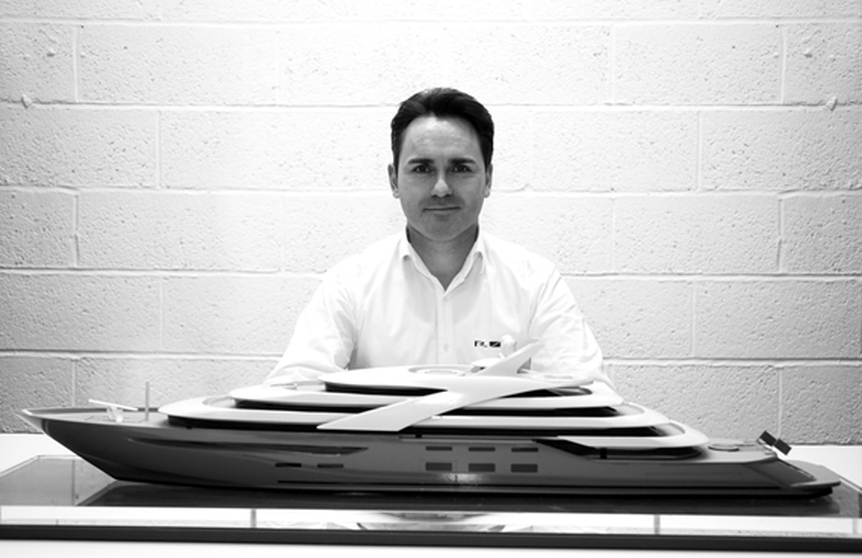 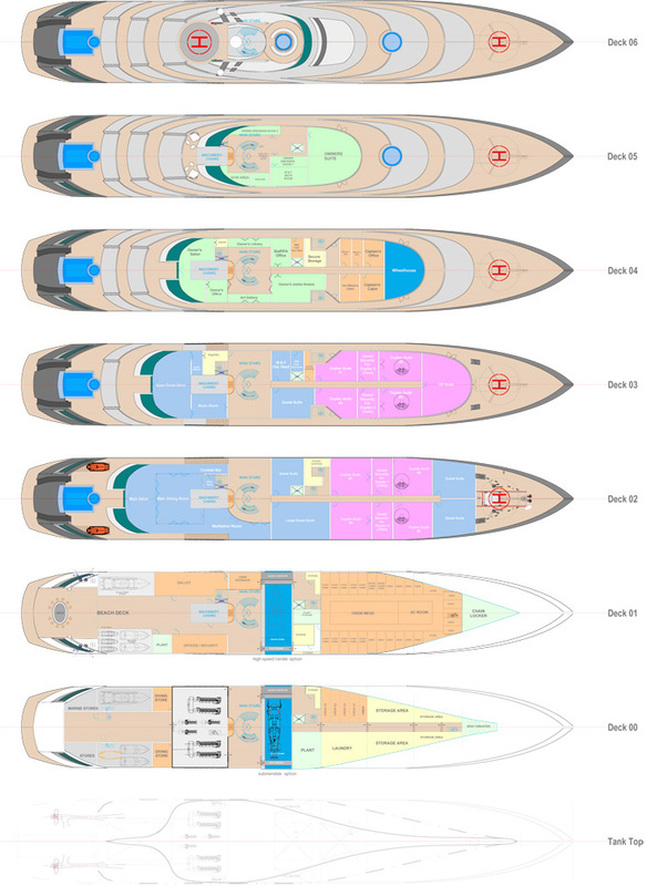 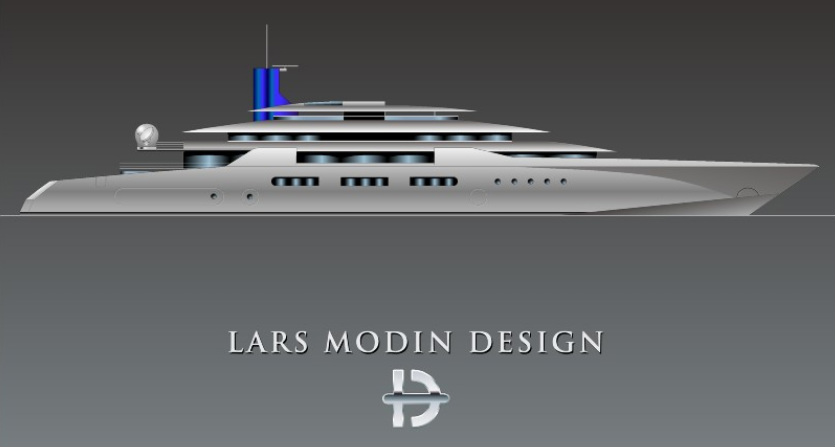 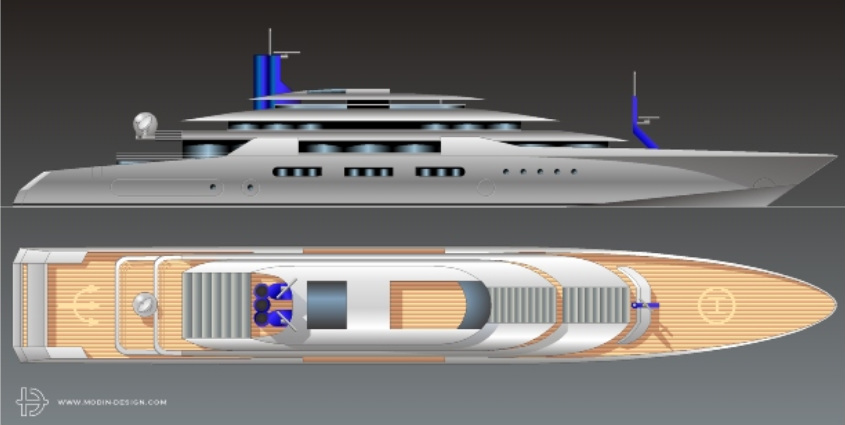 My intention has been to make a rather classic yacht, since she has to survive many trends to come during her lifespan. She might still be changed a little here and there, but as a first attempt in this giga-size "I think she looks pretty OK" says Moldin 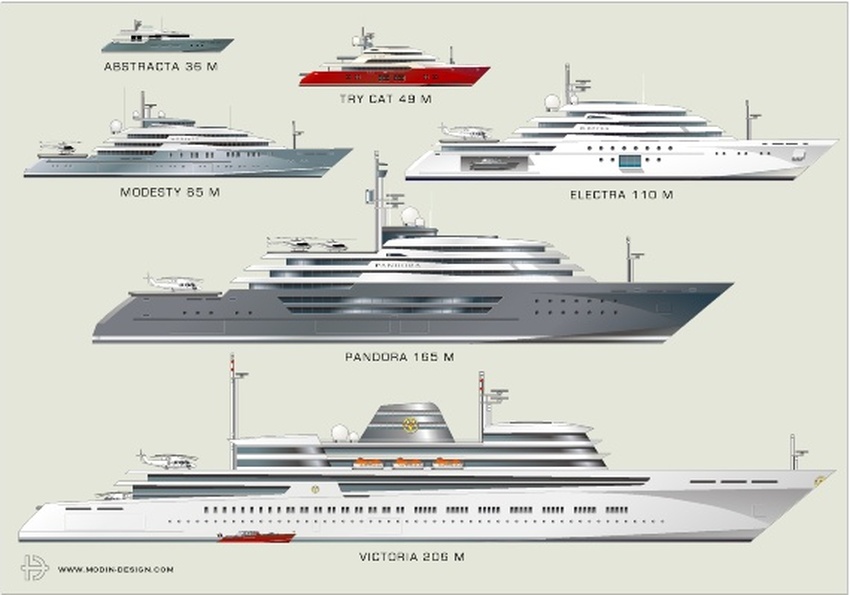 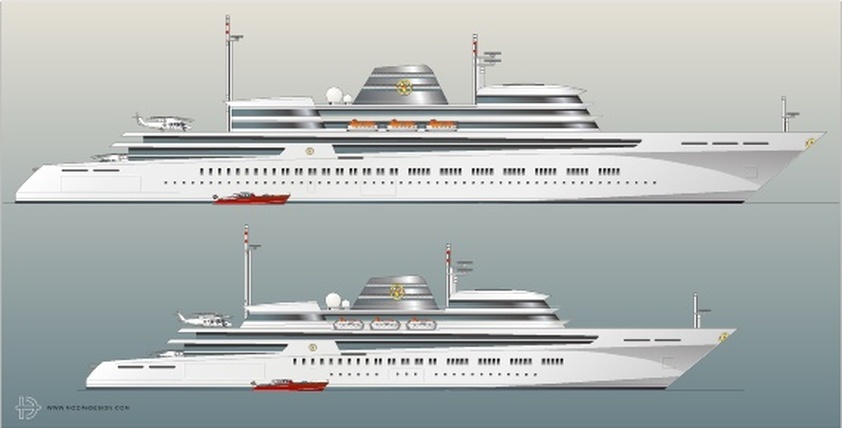 I wanted to see if it was possible to make a yacht of 170M/557Ft without the look of a cruise ship. Since there are almost no marinas taking this size of yacht, you have to carry a number of good size tenders and maybe more than one helicopter. So I made two big landing pads and a heli-garage under the aft one. Two Solas approved life boats are stored in a pocket at the transom. Well, how long will it take before we see more yachts of this magnitude. Below Are 2 Other versions of Pandora one at 121M/400Ft and another at 182M/600Ft!

Clients for yachts 180 to 200 meter are not too many. In fact there are not yet such large yachts built. She is too big for most yacht harbors but with landing pads for several helicopters at the same time she is like a floating island where you can maintain a high security. If Royal or State yachts will be built as in the past, this size can make sense. 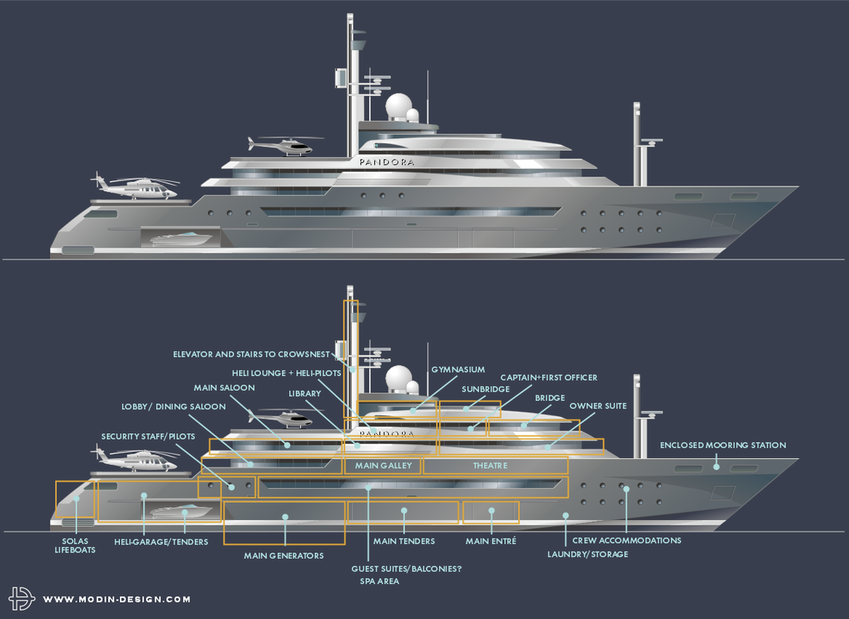 Same design, but smaller. This 122 m version is more like a yacht and still have most of the facilities of her larger sister. As an example of what she can accommodate I have made an overlay explaining the different areas. The propulsion Would be diesel electric. 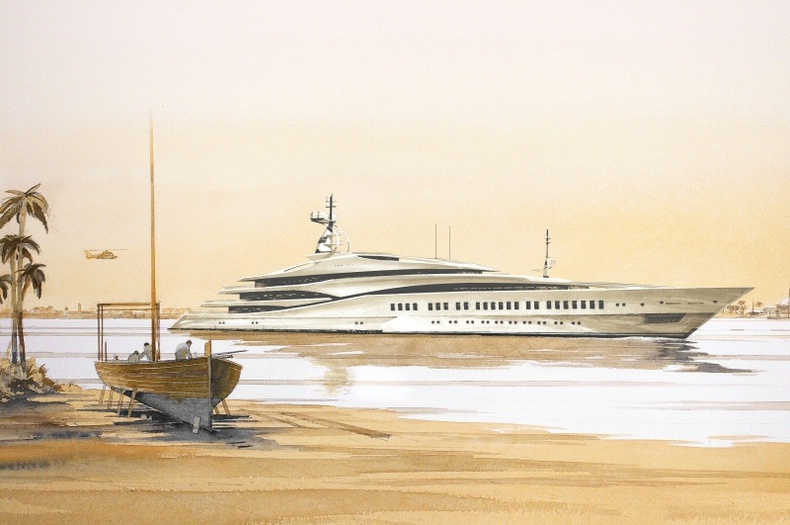 With apologies to Bo Derek, the concept yacht here could very well be a perfect ten for an owner wanting a mega-size Mega yacht delivered in a short three years. The designers at  Redman Whiteley Dixon collaborated with Devonport Yachts to produce this project, being called the Devonport One Ten. Measuring 108 meters (354 feet) and with a beam of 16.5 meters (54 feet), she may be just on paper right now, but given the demand particularly among Middle Eastern and Russian clients for megayachts these days, Devonport could conceivably construct and hand over the full-fledged yacht by 2011. In fact, while a Middle Eastern client was kept in mind by the Redman Whiteley Dixon team, both the yard and the designers state that the project can easily be adapted to address the desires of an owner of any nationality. For example, the plans for the lower deck include a traditional Hamaan, or Turkish bath, which can be switched to a sauna. Separate accommodation areas for male and female staff are also in keeping with Middle Eastern sensibilities, though it’s a simple enough change to house both sexes along the same corridor. As for the rest of the yacht, it’s hard to tell just from the sweeping profile here, but the emphasis is on large indoor gathering spaces (all air-conditioned, of course), not extensive alfresco entertainment. Whether guests board from a dockside passerelle or via the water (the starboard side of the lower deck has a hatch), they can gather in a large reception area outfitted with both an elevator and a grand staircase. Ten guest suites occupy the forward portion of the main deck, with a saloon aft that leads out to a swimming pool and seating/sunbathing area.Nearly the entire deck above this is devoted to the owner, complete with an office, gym, sauna, private dining room, and even accommodations for a personal assistant. Because the design and build teams envision a family-oriented owner, two additional suites for relatives as well as a family saloon are also on this deck, aft of the above-mentioned rooms. So where’s the dining room, you ask? One more level up, on the bridge deck; imagine the vistas to be had here. Thirty-three people can gather at a U-shape table, keeping everyone within eyesight and easing conversations. No specifics have been released on engines or anticipated performance, though with a floating palace like this at one’s disposal, there’d likely be no hurry to get anywhere. If on-land sightseeing or business matters do beckon, however, a helicopter can land (and refuel) on the sundeck and take people where they want or need to go. 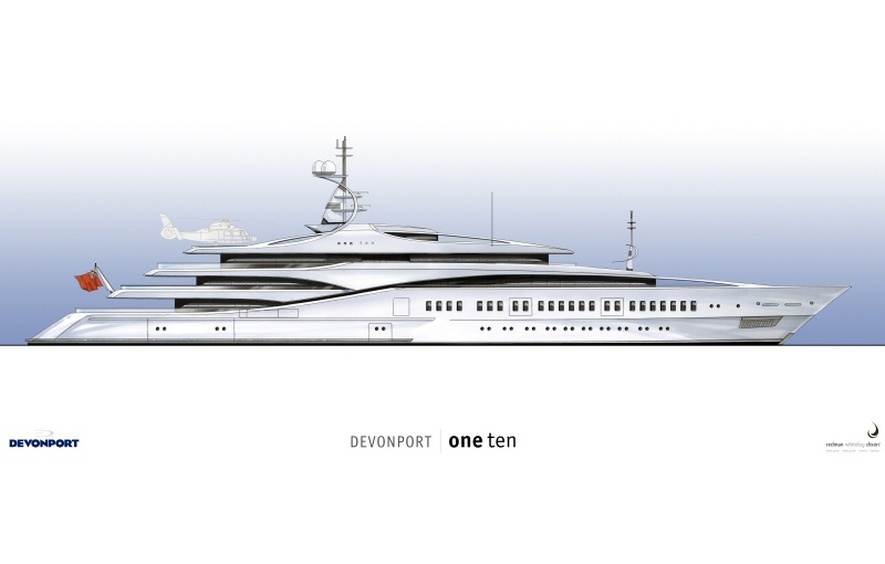