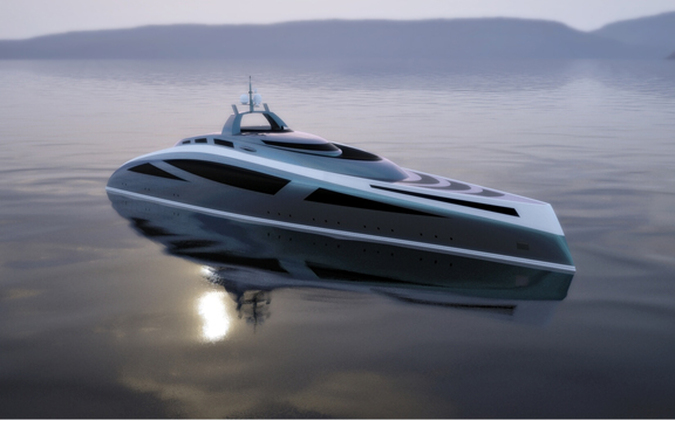 Project 1010: This yacht is designed to have the ultimate comfort where the external environment can be too extreme. It features a sundeck, outdoor lounging area complete with Jacuzzi and sun pads. The Owner’s suite has its own separate living space and lounge complete with study. The vessel can also accommodate 2 VIP suites and 4 guest suites. The main feature of this yacht is an Indoor mezzanine lounge overlooking an enclosed living space for total climate controlled living complete with a large indoor pool and facilities toward the bow of the yacht. The yacht also had a formal dining room and lounge which looks out towards the aft of the yacht. The garage can hold a 10m tender complete with all the toys including jet skis, tenders and ski boards. There is also a gym and folding beach club on the lower deck. Principle Dimensions
Length Overall 110 m Length Waterline (@ 0.7m draft) 110 m Breadth (moulded) 17.0 m Design Draft (nominal) 5.0 m
Maximum Speed (at design draft) 26 Knots Cruise Speed 18 Knots Range 5000 Nm Guests 14 Crew 28

Project 1022 92m M/Y
Features
The yacht can be used as a private yacht, charter yacht, and as a mini cruise liner. This is done by a clever layout so she can both facilitate a 20 guest charter, as well as a 40person mini cruise. This idea is carried true out the vessel, from the accommodation deck where it can house VIP and guest cabins depending on the occasion, but also communal areas, relaxation and dining area’s as well as the crew areas and technical spaces required has been developed as such. The interior, developed in collaboration with March& White, specialised in projects that require an exceptional level of design and creativity. They were approached at an early stage to develop the interior design concepts for the yacht and drew on their experiences designing high end luxury residences. Principle Dimensions
Length Overall 92 m Length Waterline (draft) 89.3 m Breadth (moulded) 16.8 m Design Draft (nominal) 4.0 m Maximum Speed (at design draft) 20 Knots Cruise Speed 16 Knots Range 6000 Nm Guests 40 Crew 23 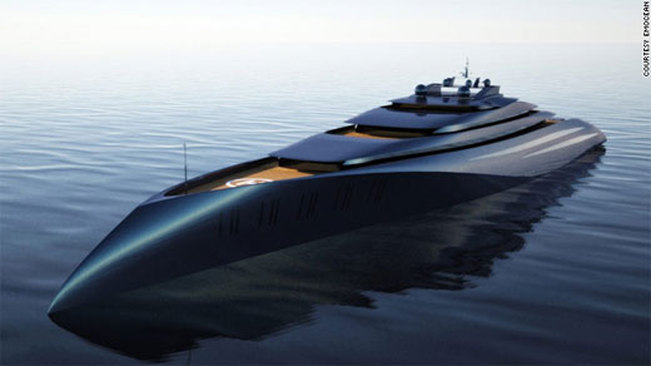 The mega yacht business has been slow since the economy soured, but at least one luxury shipbuilder appears to be betting on a rebound. Luxury blog site James list ousted Belgium-based Emocean Yacht Design's plans for an extravagant new mega yacht, tentatively called Project 1000, that -- if built -- would be the world's largest vessel of its type.
At a whopping 656 feet (nearly the length of two football fields), the ship would be 99 feet longer than the Eclipse, which became the largest private yacht on the water when Russian billionaire Roman Abramovich launched it last year. In addition to being massive, the futuristic design is replete with features that would impress even the most finicky mega yachtsman, including a 100-foot swimming pool and a health spa. The plans call for a drive-in garage, two 98-foot day boats and a helipad with a hanger, so well-heeled skippers will be able to bring their other toys onboard. The yacht, which would have a range of 6,500 nautical miles, comes standard with plenty of entertainment options to help pass the time on long voyages. There's a nightclub, a casino and a dual-level cinema for film buffs who want a more authentic movie-going experience.The floating folly would have rooms for 45 guests, including 10 VIP rooms, 22 guest suites and the owners' deck. It would also have space to accommodate 70 crew members. And with a maximum speed of 28 knots and a cruise speed 20 knots, the ship would be surprisingly fast for its size. However, the project is still very much in the planning phase and with the global economy still struggling it's not likely to be launched anytime soon. Emocean said it would take at least four years and cost between $500 Million and $1 Billion to design and build the massive Mega Yacht if someone ordered it today. The firm acknowledged that the economic climate is not ideal for such an ambitious plan, but added that some mega yacht owners may be looking to upgrade soon as conditions improve. 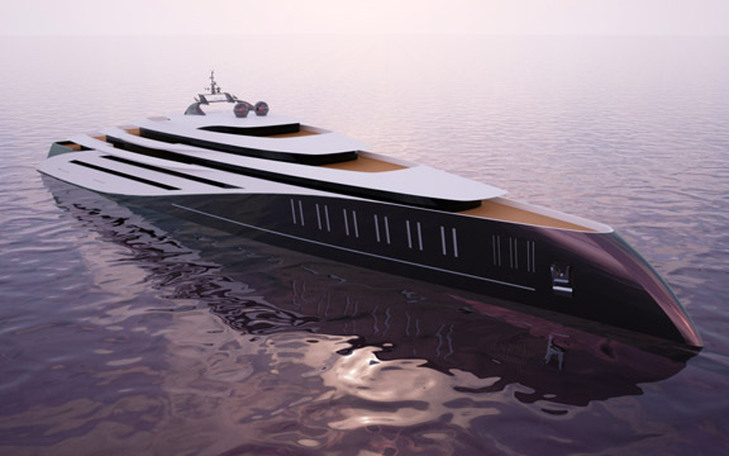