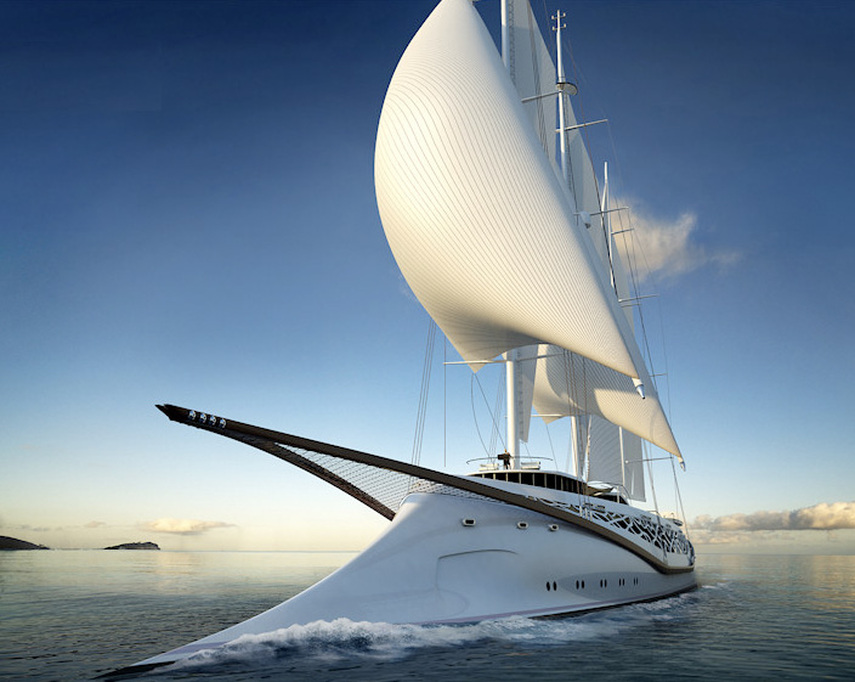 Designer Igor Lobanov has revealed his latest innovative design concept to Super Yacht Times. He stated that Phoenicia it is an explorative study, focusing purely on the design elements themselves. This concept amalgamates various historical influences with a new modern design. The model explores a 100+ meter superyacht with generous open deck space, particularly aft of the yacht including a helipad; a feature which is usually seen on large motor yachts rather than a sailing yacht. Another key element of this model is an all surrounding open deck arranged as a gallery with a pattern design as a feature. One of the proposed patterns has a special Arabian influence. Additionally Phoenicia has a very unconventional bow, which has a hint of ancient Greek influence. This design gives the feeling of 1000 years of history of an “ancient royal ship” with the appropriate name concept of "Phoenicia". Phoenicians are believed to be the people who influenced the Greek alphabet. From the Greeks it was then passed to Romans as Latin and to Slavs (and even Mongols) as Cyrillic. As a result a wide range of nations from Australia to Russia are now using letters that derive from those once created in the small area of Phoenicia. Also known for trading across the whole of the Mediterranean, the Phoenicians influenced many nations and cultures that lived around sea. The Phoenicians are a link between East and West, between modern Muslim and Christian cultures. Hence, this name is symbolic and appropriate to the design of Phoenicia. This concept is an expression of how we should continue to explore different shores, different cultures and the various way of life. 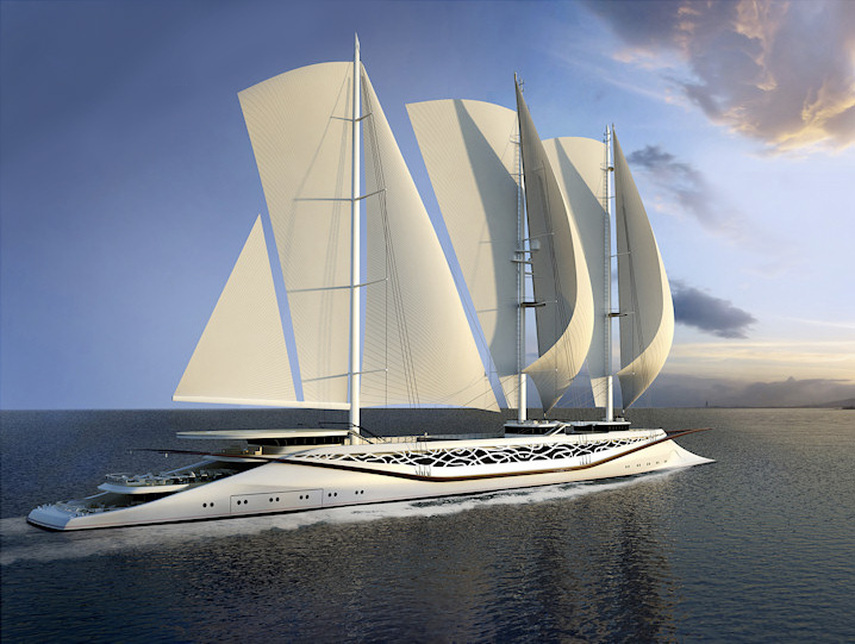 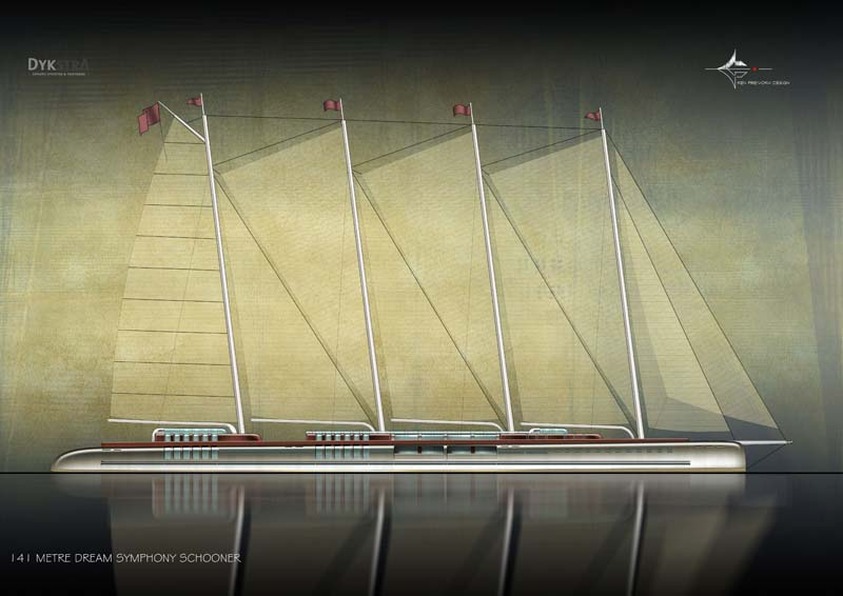 On 23 September Dream Ship Victory signed a contract with Dykstra & Partners for the Naval Architecture and Ken Freivokh Design for the design and styling of Dream Symphony. At 141m loa (462ft) she will be the largest sailing yacht ever built. Dream Symphony will not only be the largest, but she will also be of all wood construction. Dream Ship Victory, with the same naval architecture and design team, already have considerable experience in large scale all wood yachts and the three yachts currently in build total 162m. Mikhail Vorontsov, at 65 metres, is now being fitted out in Holland and work is progressing on Princess Maria (55 m) and Imagination (42 m). Contracts were signed between Valeriy G. Stepanenko, owner of DSV and responsible for the project concept, Gerard Dijkstra and Thys Nikkels on behalf of Dykstra & Partners, and Ken Freivokh on behalf of KFD. An initial concept was presented at the Monaco Yacht Show on the Dykstra & Partners stand and construction will start in 2011.
Dream Ship Victory: www.dsvyachts.com
Dykstra & Partners: www.gdnp.nl
Ken Freivokh Design: www.freivokh.com 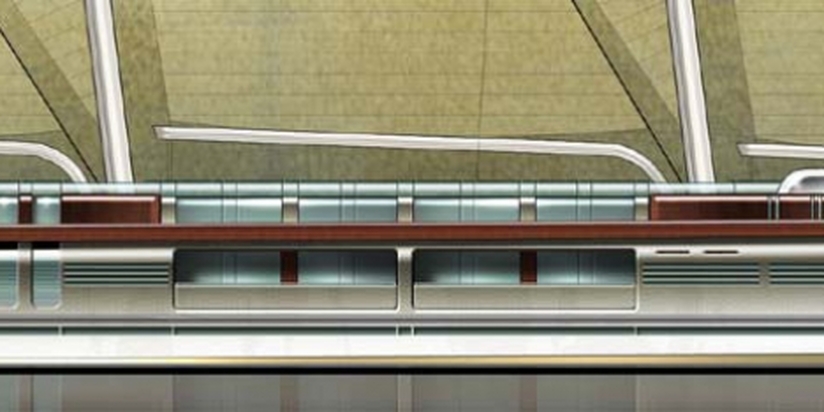 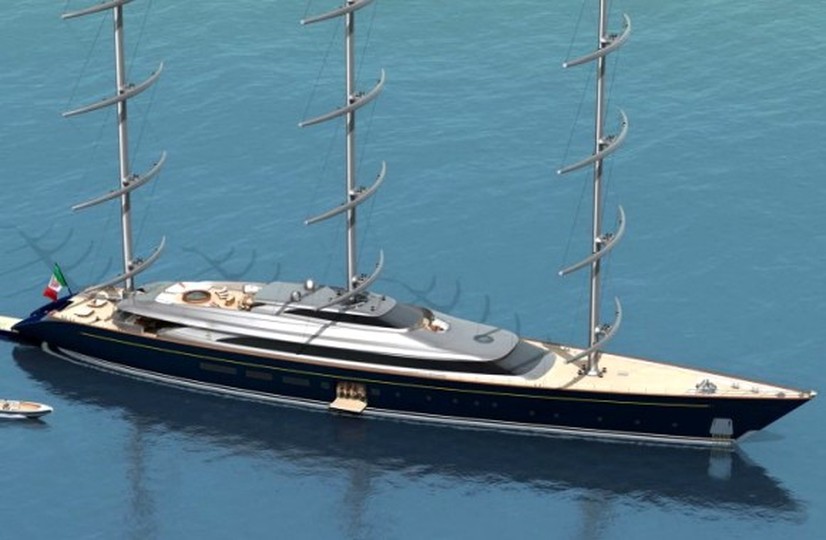 Last summer we reported that hedge fund queen Elena Ambrosiadou had purchased the 289-ft. Maltese Falcon, the world's largest, best designed, and most expensive sailing superyacht, for around $100 million. She might want her money back – Perini Navi, the Italian shipyard that built the incredible yacht, is now hard at work on a new one that will dwarf the Maltese by 46 feet. The 335-ft. megayacht, dubbed the C.2157 (above), also has three enormous self-standing, rotating masts and will be equipped with an even more impressive version of Perini Navi's revolutionary carbon fibrer DynaRig sailing system. Topping the Maltese's 15 sails and 25,791 sq. ft. sail area, the 335 will be capable of a maximum speed of 19.5 knots despite its impressive size. Look for the 2,700 ton yacht with a steel hull and aluminum superstructure to equal if not better the Maltese Falcon's 10-day Atlantic crossing time as well. Perini Navi has not disclosed which of the world's billionaires commissioned the craft, which is expect to cost several hundred million dollars, but it will no doubt have opulent fittings and finishes galore throughout its five decks, including two contoured sets of stairs wrapping around the buttress of the aft mast descending towards the aft of the main deck. There will also be accommodations for more than the Maltese's 12 guests in the luxurious staterooms in addition to an enormous master suite. 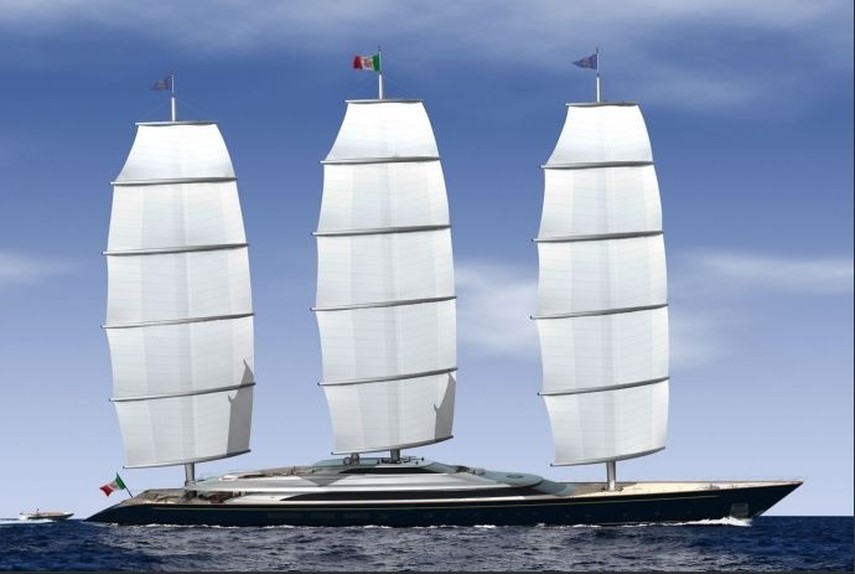 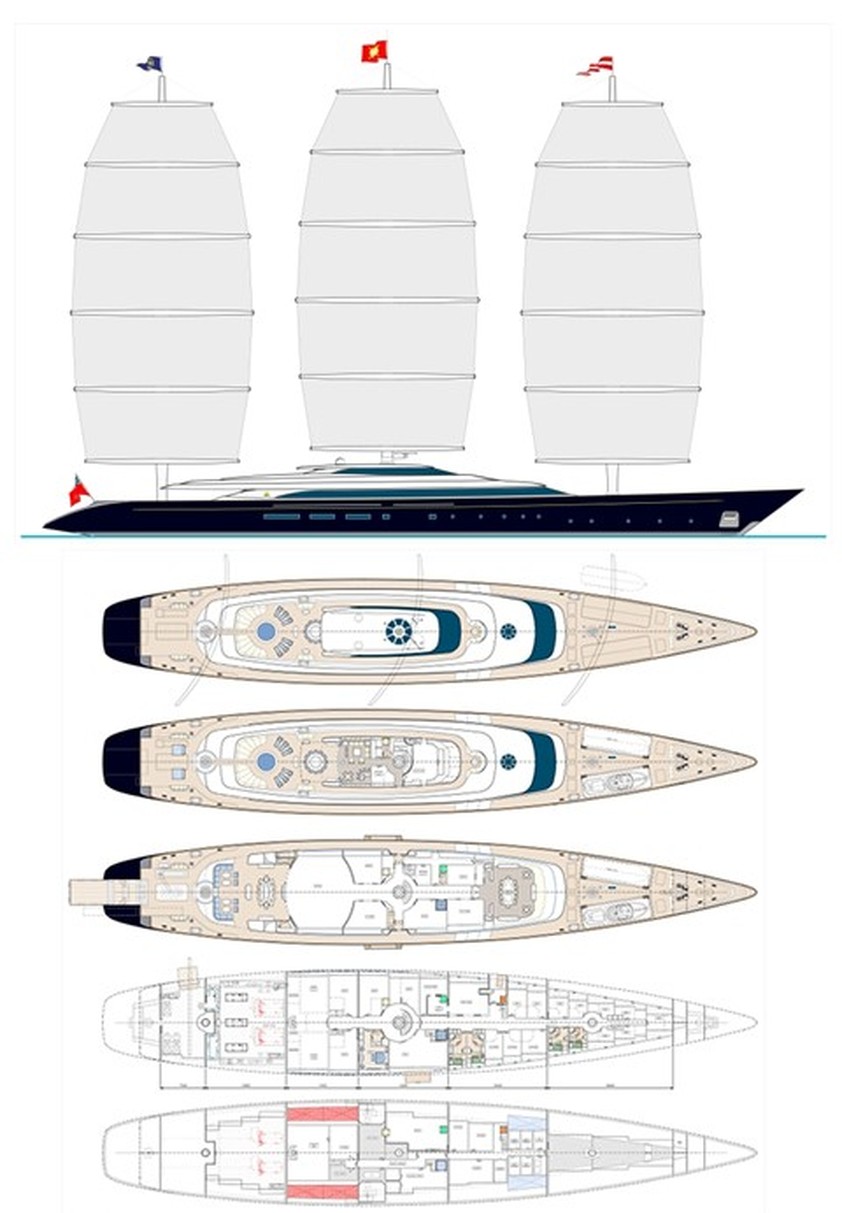 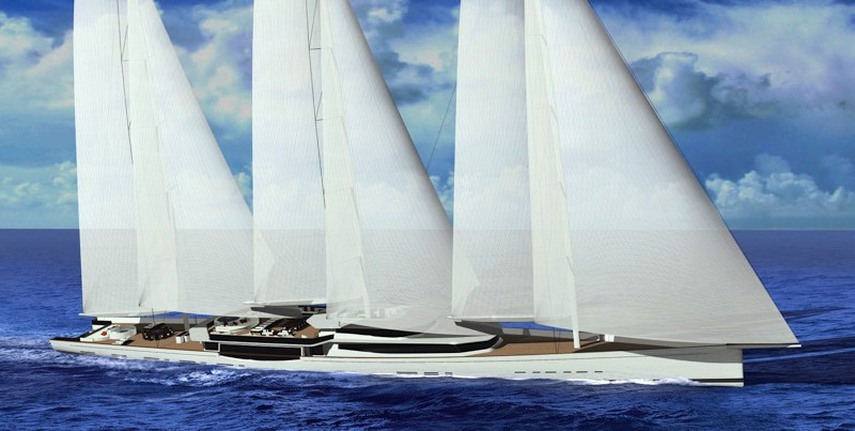 At the 2010 Monaco yacht Show, Design Unlimited and Reichel Pugh Yacht Design unveiled the details of the remarkable new 100m mega sailing yacht. At 100 metres in length she will be the largest luxury sailing yacht ever built. Modern and graceful, this high performance 100m design instantly stands out for its enormous yet still private external areas fitted out for sunbathing, dining and general relaxation. The 100m mega sailing yacht has her accommodation spread across three decks, with the emphasis in her communal zones remaining on cool natural tones and maximum use of natural daylight. The 100m superyacht will feature 8 luxurious cabins including an owners’ suite plus a second VIP suite, complemented by four additional double and two twin suites. Facilities for 12 crew members are located forward.  Additional features include a cinema, ample and varied relaxation areas and a circular central lobby with an open spiral staircase to the lower decks.This 100m design by Design Unlimited and Reichel Pugh Yacht Design will be an extraordinary yacht unlike anything seen before, and capable of high speeds, sustainable global voyaging in the utmost comfort. The yacht is currently being marketed exclusively by YCO. Design Unlimited specialises in yacht interior design and exterior styling for both custom and production yachts. Founded in 2000 by Mark Tucker the team has worked on some of the most well known sailing and motor superyachts afloat today, as well as working in conjunction with many famous brands including Sunseeker and the Hanse Group. 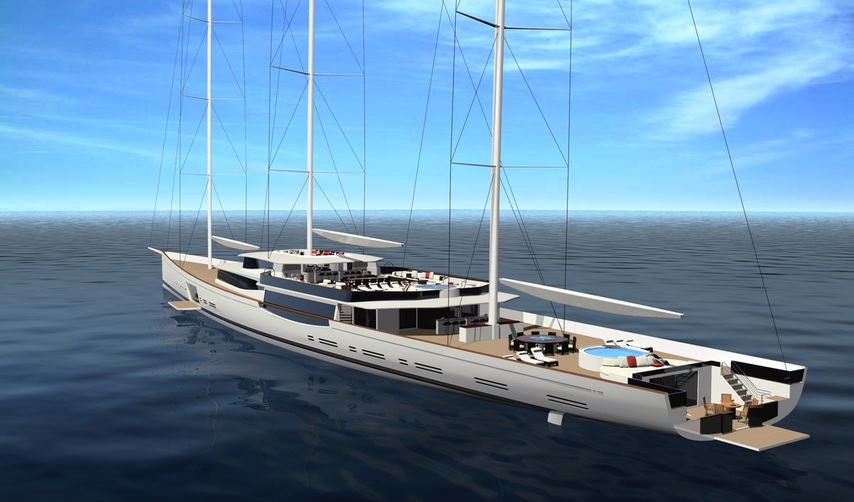 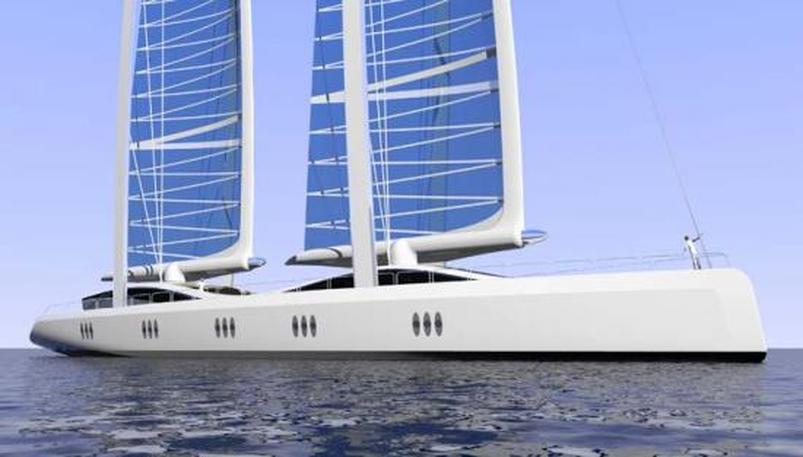 Erik Sifrer’s design for the Green Jet 57 m (187 foot) sailyacht offers the perfect solution for the eco-friendly, lazy, and luxury-minded sailboat enthusiast. The concept sailyacht operates similar to a motoryacht, as it’s navigated and controlled by a computerized sail system that is operated by the touch of a control screen. Two fully automated Aero-sails guided by hydraulic motors act as the main propulsion system for the Green Jet, and the hydraulic motors are designed to hoist the sails to full height in 30-40 seconds. The automated sail system means that the crew can focus more on catering to the owner’s requests, versus waisting their time rigging the sails. Like other luxury yachts there are separate areas for the guests and the crew. In this case, the crew has its living quarters in the front of the boat, while the owner’s suite is located in the rear. A centrally located pool divides the two areas, which are distinguished on the deck by their wave shaped roofs and circular sky windows. At night the boat’s sails light up, making the Green Jet look like a floating nightclub. Check out the images below for a detailed look at the Green Jet sailyacht. 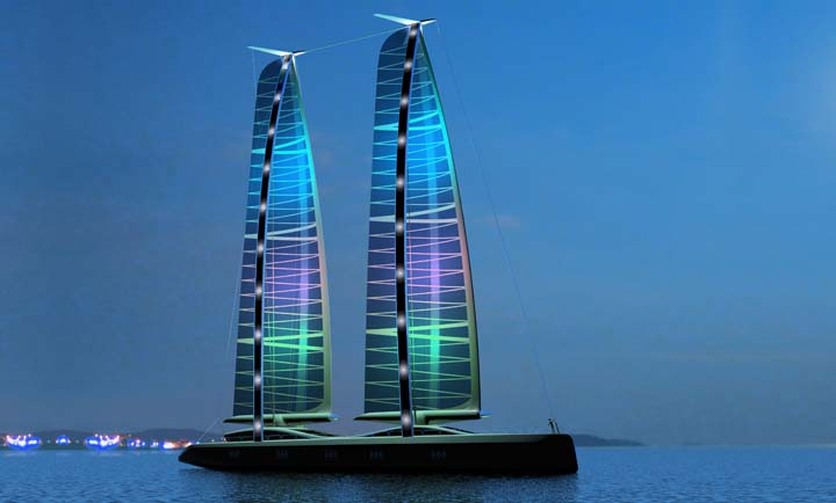